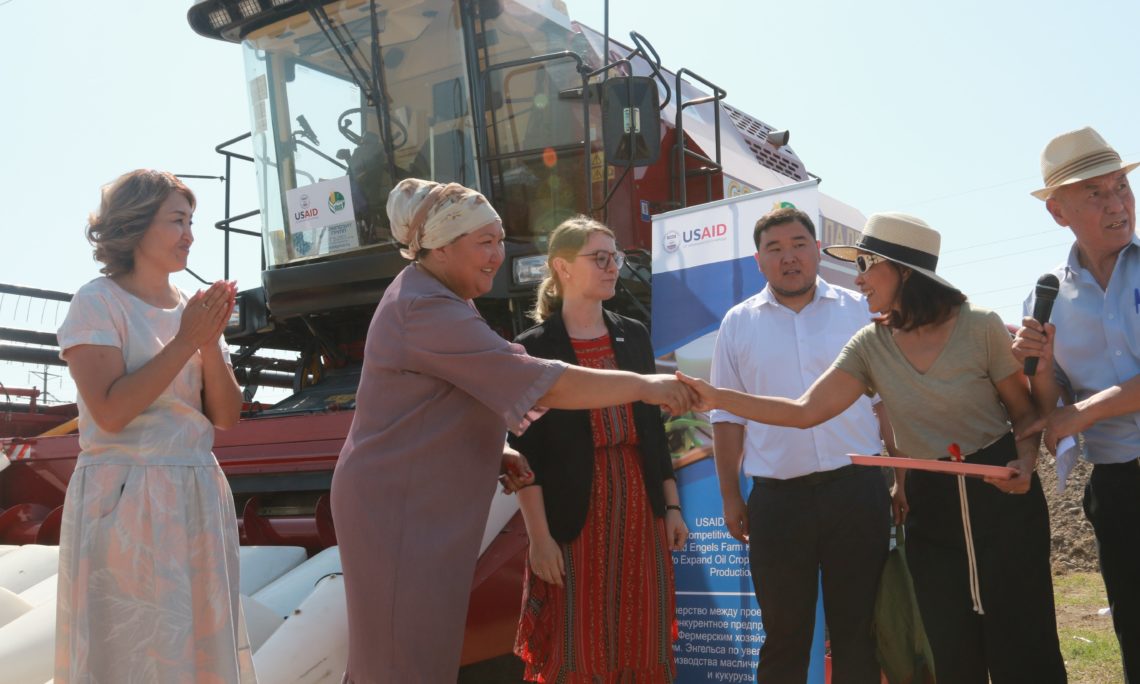 The U.S. Government through the United States Agency for International Development (USAID) procured and handed over soybean harvesting machinery to the Engels Farm company in Chui Oblast. Approximately 400 soybean farmers will use the machinery to reap larger, higher quality harvests. The farmers will then be able to sell more of their crops at higher prices thanks to the identification of a confirmed buyer.

Representatives of USAID, Ministry of Agriculture, Government Office, partners and local farmers took part in the official handover ceremony. The event also included an exhibition and training session for farmers on cultivating soybean.

USAID formed a partnership with Tien Shan Mission Society, Engels Farm, and Eldan Atalyk to boost soybean and soybean oil production in the country. Under this agreement, USAID will mobilize and train farmers on advanced soybean production practices. Tien Shan Mission Society and Engels Farm will supply high-quality soybean seeds and machinery services to farmers. Eldan Atalyk will purchase the resulting harvests for its processing facility in Uzgen.

“As farmer I can say that it’s getting harder and harder to cultivate crops without a guarantee that somebody will buy it. We signed an agreement with Engels farm to purchase their soybean for a guaranteed price which will help reduce risks” says Turat Ukubaev, head of Atalyk.

USAID contributed $90,000 to a partnership with three Kyrgyzstani agri-businesses, who together invested another $325,000.

“Our activities are designed to support all steps of the agricultural cycle, from planting to securing sales in international marketplaces. Our goal remains clear and enduring: create jobs and increase the incomes of farmers,” said Ilire Agimi, representative of USAID.

The equipment was provided as part of USAID’s Enterprise Competitiveness Project, a five-year project designed to increase the income levels of Kyrgyzstani households through the creation of 19,000 jobs and better livelihood opportunities among small and medium enterprises.