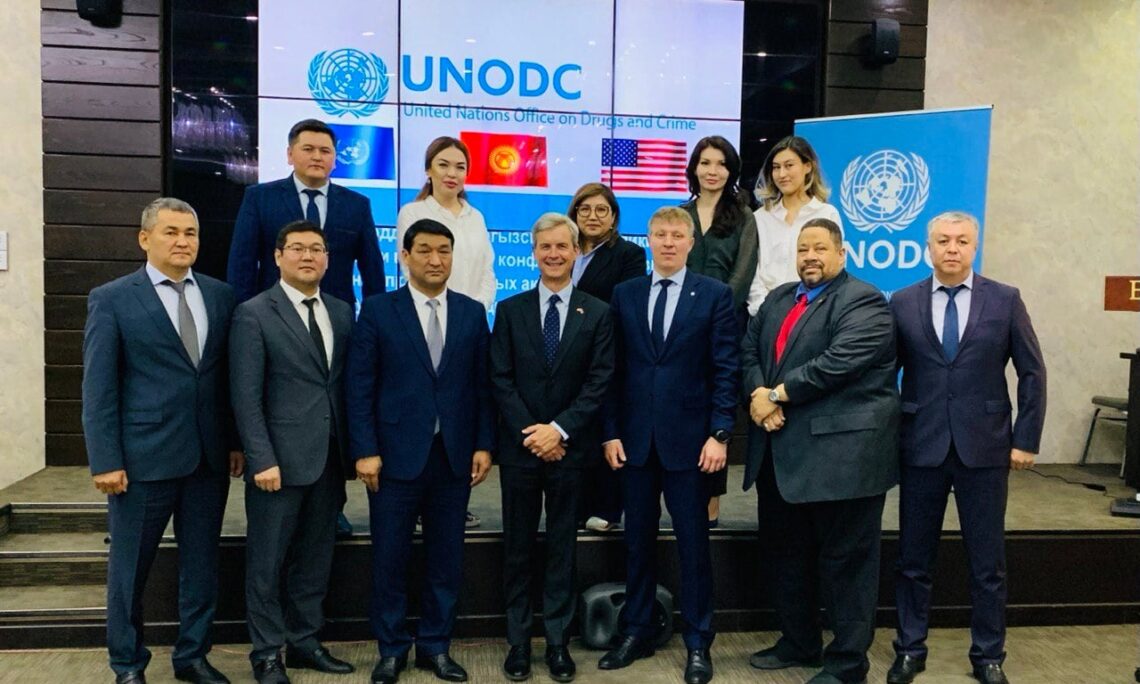 27 April 2022 – Today in Bishkek, representatives from the U.S. Embassy, UNODC, and the Kyrgyz government joined together to launch a new project to support efforts by the Kyrgyz Government to recover stolen assets through corruption related crimes. This initiative will help Kyrgyzstan to recover stolen assets through improving interagency cooperation between the Prosecutor’s General Office, State Financial Intelligence Service and the Ministry of Internal Affairs along with the capacity of law-enforcement officers to investigate, prosecute and recover assets from crimes with an international nexus.

At the event, U.S. Embassy Bishkek’s Acting Deputy Chief of Mission Mr. Moore thanked the participants for their work to strengthen the Kyrgyz Republic’s legal and judicial systems, noting that “The Kyrgyz Republic has prioritized fighting corruption and the United States stands ready to support you”.

With funding from the U.S. State Department’s Bureau of International Narcotics and Law Enforcement Affairs (INL), UNODC in partnership with the General Prosecutor’s Office, the Ministry of Internal Affairs and the State Financial Intelligence Service under the Ministry of Finance of the Kyrgyz Republic launched this new project “Support to the Kyrgyz Republic in the field of identification, confiscation and recovering the illicitly-acquired assets emanating from corruption activities,” to support the Government’s efforts in recovering stolen assets and returning crime proceeds.

Speaking at the launch event, Mr. Kanatbek Turgunbekov, Chairman of the State Financial Intelligence Service (SFIS) under the Ministry of Finance of the Kyrgyz Republic assured of the SFIS is always ready to support and implement all creative initiatives in the field of identifying, confiscating and returning illegally acquired assets obtained as a result of corruption activities. “We will be happy to study and exchange experience with other countries that are successfully solving this problem and, international experts who will assist the Kyrgyz Republic in assessing the situation and support us to improve this area.”

Mr. Andrey Seleznev, the Head of the UNODC Programme Office in the Kyrgyz Republic presented information about the project to the participants which followed by the wide discussion.

“It is critical to develop the country’s stolen asset recovery efforts, including operational responses for enhancing legislation, analytical, investigation, prosecution and technical capacities of the law enforcement agencies and inter-agency cooperation as it is the key to success in combating corruption in the country. These efforts contribute to the overall Sustainable Development Goals and the 2030 agenda”, stated Mr. Andrey Seleznev, the Head of the UNODC Programme Office in the Kyrgyz Republic. Mr. Andrey Seleznev presented information about the project to the event participants which was followed by wide discussion.

The project will also contribute to SDG 16 Goal: “Peace, Justice and Strong Institutions Promote peaceful and inclusive societies for sustainable development provide access to justice for all and build effective, accountable and inclusive institutions at all levels”, by 2030, significantly reduce illicit financial and arms flows, strengthen the recovery and return of stolen assets and combat all forms of organized crime.