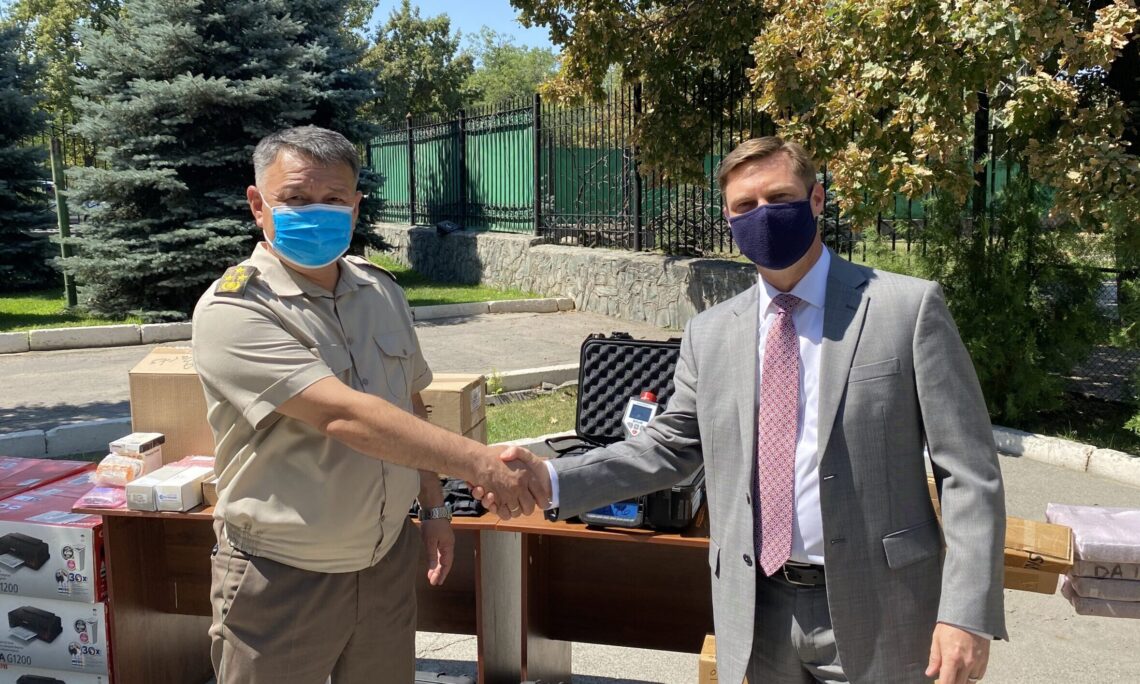 July 8, 2021- BISHKEK – During a ceremony today at the Border Guards Service of the State Committee on National Security of the Kyrgyz Republic (BS SCNS), the U.S. Embassy in the Kyrgyz Republic, on behalf of the U.S. Department of Energy’s National Nuclear Security Administration Office of Nuclear Smuggling Detection and Deterrence, also known as NSDD, handed over handheld radiation detection and identification equipment with a total monetary value of over $170,000. This equipment will enable BS SCNS officers to more easily detect and identify and stop radioactive materials from being trafficked at the country’s borders.

At the ceremony, U.S. Embassy Bishkek’s Charge D’Affaires Brian Stimmler was joined by Deputy BS SCNS Director Colonel Daniar Satimov, Deputy Head of BS SCNS International Cooperation Department Ruslan Bokoev, and other Kyrgyz officials. Charge D’Affaires Stimmler said that this is a new milestone in cooperation between two nations regarding nuclear security, adding: “Secure borders build a safer world, and the United States is committed to supporting the Kyrgyz Republic to secure its borders from global threats that affect us all, such as human trafficking, smuggling of nuclear materials, global pandemics, and international terrorism.”

U.S.-Kyrgyz cooperation to prevent nuclear proliferation has been occurring for more than a decade.  A Memorandum of Understanding (MOU) was signed in Bishkek in August 2008 between the U.S. Department of Energy’s NSDD and the Kyrgyz Republic State Customs Service that established cooperation on the installation of radiation detection systems at 16 border crossing points which was completed in 2015.