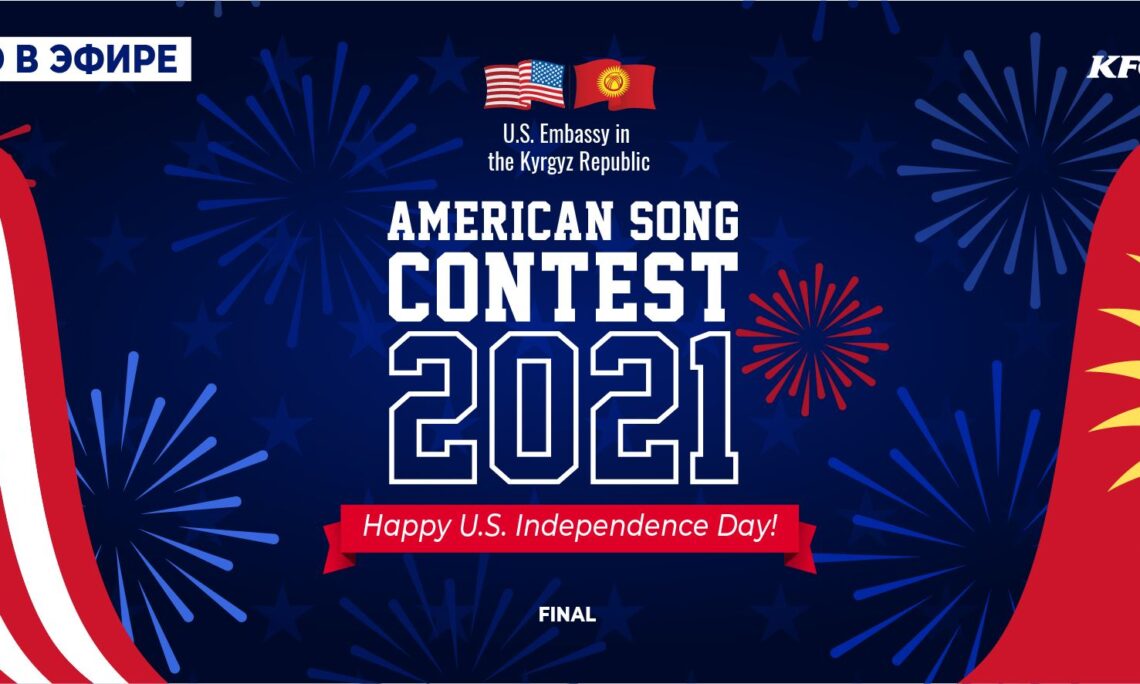 Winners of the 2021 American Song Contest, who competed from among over 600 students from throughout Kyrgyzstan, were announced by an expert jury featuring a Vice-President of the Academy of Education of the Kyrgyz Republic Ulanbek Mambetakunov, professional singer Omar Janyshov, and Acting Deputy Chief of Mission, U.S. Embassy Steven Rider during a live broadcast on the NTS TV channel Thursday, July 1.

This year, the televised finale for the American Song Contest (ASC) served as the U.S. Embassy’s Independence Day celebration, in a virtual format to avoid spread of COVID-19.  The finale was broadcasted on television channel NTS with real-time text voting for the People’s Choice winner.  The event also was livestreamed on a special YouTube channel “American Song Contest Kyrgyzstan.”

The program included a live performance by Omar and the broadcast of the Embassy’s collaborative video with recording artists Aiym and Begish for “Suroon,” which highlights similarities between U.S. and Kyrgyz cultural values. In his closing remarks, Charge D’Affaires Brian Stimmler emphasized, “Today we celebrated not just America’s birthday, but our shared values. The friendship of our countries is based on these shared values, like our love for music and for democracy.”

Adilet Almazbekov, first place winner of the School Contest, is an 11th grade student at the School-gymnasium №24 in Bishkek and sang “Welcome to My World” by Elvis Presley. After learning he won top prize, Adilet said, “Thank you very much for the presented emotions. It was cool.” Sezim Ergeshova, 9th-grade student from School-gymnasium №37 in Bishkek won second place with her rendition of the song, “I’m a Mess” by Bebe Rexha. Third place winner Baiberdi Berdibaev is an 9th grade student at school named after T. Sydykbekov in Tup rayon, Issyk-Kul oblast and sang “Just the Way You Are” by Bruno Mars.

Adina Erkinbekova won top prize in the University Song Contest. She is a second-year student at the International University Ala-Too in Bishkek and sang “Feeling Good” by Nina Simone. Adina said, “The thought that I took the 1 place, certainly makes me happy and satisfied with my results and immensely grateful person. Thank you for existence of such a wonderful competition, which gives everyone a chance to feel the taste of the scene.”

Elizaveta Kurasova is the People’s Choice winner. She is an 11th grade student at the school-gymnasium №4 in Kant.

Since 2012, the U.S. Embassy has hosted the American Song Contest each year, in partnership with Sun People, to help secondary school and university students master English language skills and learn more about U.S. art and culture by learning and singing an English language song by a U.S. artist. Last year’s contest was the first virtual contest featuring student performer music videos. To protect contestants, judges, and technical staff from the pandemic, contestants recorded professional quality music videos which were broadcast for judges and viewers as the contestants watched throughout the Kyrgyz Republic.