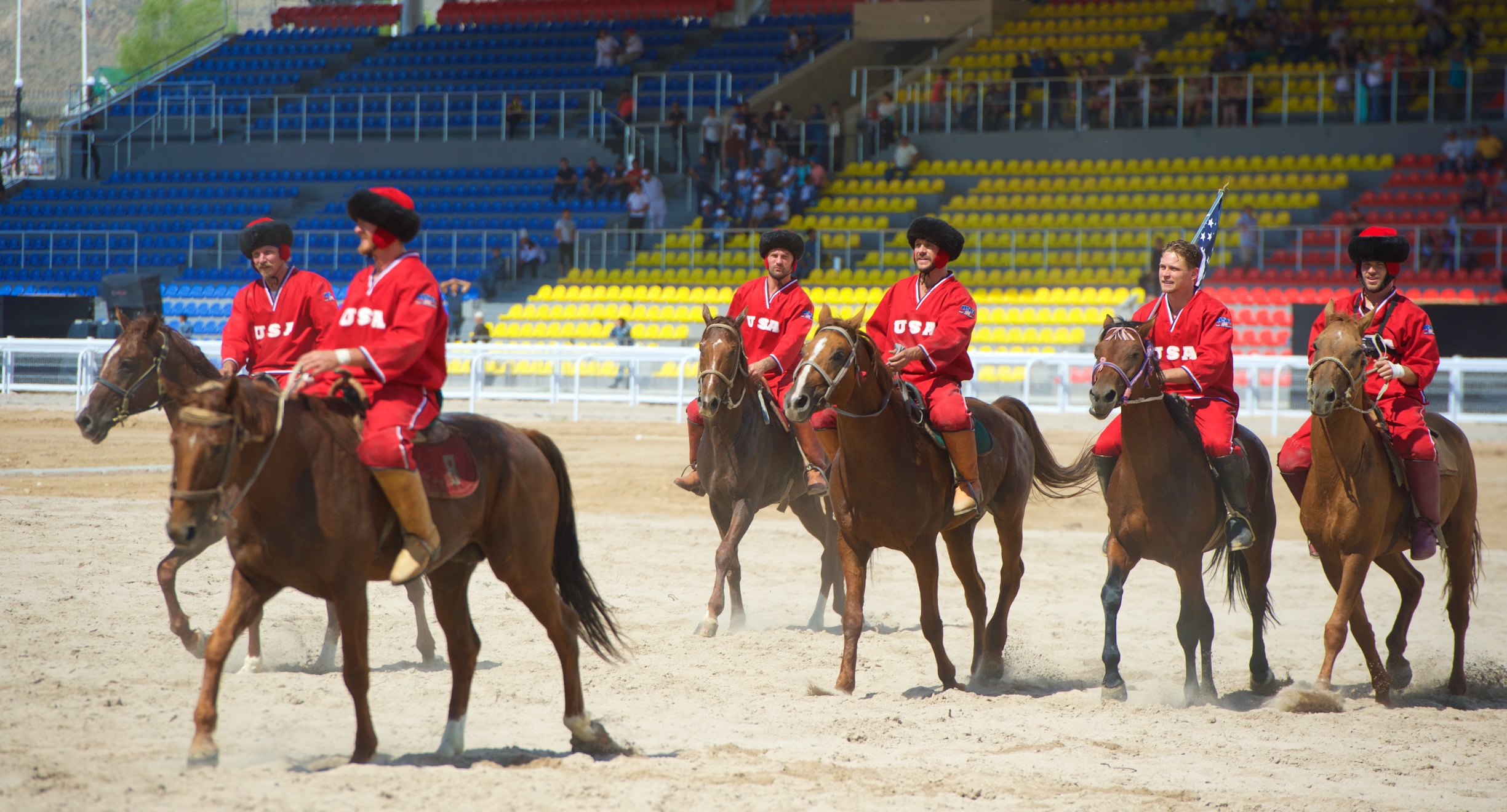 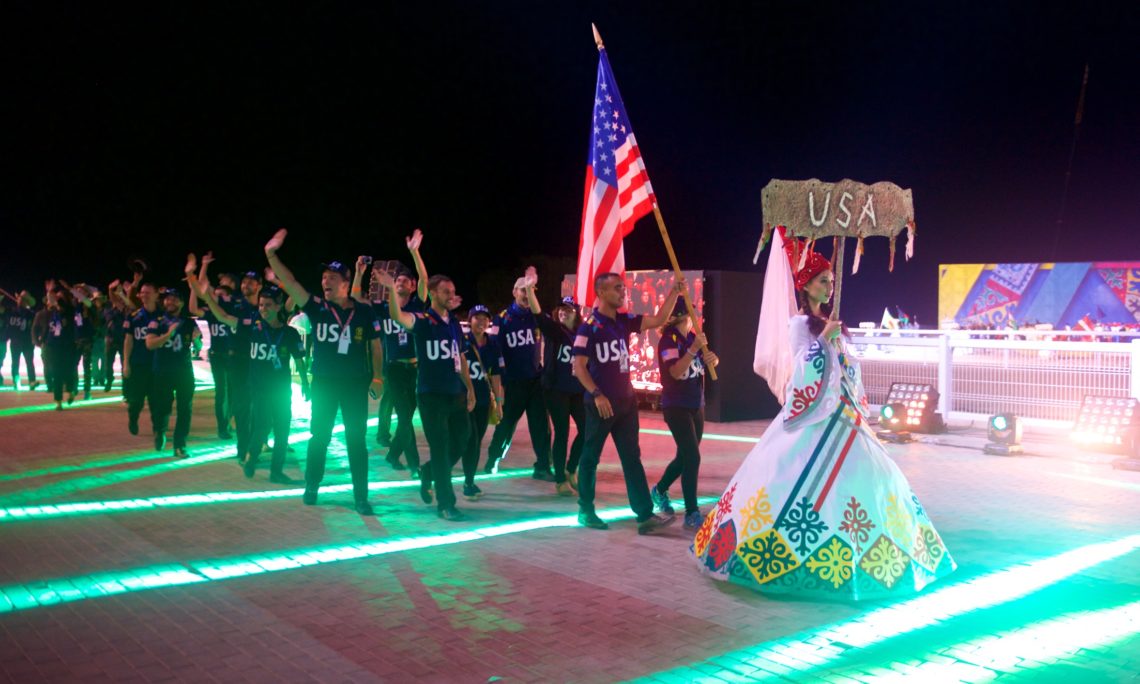 The U.S. Embassy is pleased to announce that a U.S. delegation comprised of rodeo cowboys, Native American dancers, Peace Corps Volunteers, and an American Indian carpet weaver will participate in the Second World Nomad Games on September 3-8, 2016 in Cholpon Ata. In celebration of the 25thanniversary of diplomatic relations between the United States and Kyrgyzstan, U.S. Ambassador to Kyrgyzstan Sheila Gwaltney, Deputy Assistant Secretary for Public Diplomacy in South and Central Asia Angela Aggeler, and Deputy Assistant Secretary for Central Asia Daniel Rosenblum will also join Kyrgyz and other international participants to celebrate the cultural heritage and diversity of nomadic civilizations around the world.  These leaders will visit the main cultural events and meet their counterparts in the Kyrgyz government to promote a deeper understanding of the importance of the bilateral relations that has been steadily growing over the last 25 years.

Ten cowboy envoys from Jackson Hole, Wyoming will compete as athletes in Kok Boru at the Hippodrome in Cholpon-Ata. Two of the group visited Kyrgyzstan in 2012 on a U.S. Government-supported program, and look forward to returning.

Native Pride Dancers, a Minnesota based troupe featuring an innovative blend of modern and traditional Native American dance styles, will perform and carry out workshops, presentations and interactive storytelling sessions at the “Nomad’s Universe” Folklore Festival in Kyrchyn Gorge on September 4, 5 and 6. The Native Pride Dancers strive to educate, inspire, motivate and empower diverse communities to bridge cultural gaps through indigenous traditions.  The dancers represent the Navajo, Ute, Dakota, Sioux, Cree, andShoshone tribes of the Western United States, and the Potawatomi and Ho-Chunk tribes of the state of Wisconsin.

Approximately 20 Peace Corps Volunteers will take part in traditional Kyrgyz intellectual games, including Ordo, Toguz Korgool, and Mangala at the Aurora Resort. Peace Corps Volunteers teach English to students around the country in conjunction with the outstanding teachers of Kyrgyzstan who are dedicated to empowering youth.  During their service, Volunteers live in host families and learn about Kyrgyz culture and traditions.  They also speak the local language and promote mutual understanding between the peoples of the United States and the Kyrgyz Republic.  They have been training for months in these intellectual games.

Barbara Ornelas is one of the most renowned artists in Navajo weaving coming from multiple generations of weavers. Barbara Ornelas will conduct workshops in Kyrchyn pasture. She will also meet local craft makers and students in Chui, Issyk-Kul, and Naryn Oblasts to learn about local artistic expressions and discuss Native American art.

The American Corner will have its own yurt in Chyrkyn pasture where various activities will be held:

•  demonstrations of lacrosse and other games originated by Native Americans

•  other American sports like baseball, American football, and Frisbee

•  demonstrations of weaving techniques, and tables where visitors can make small crafts

•  a book exhibition, storytelling (with a focus on Native Americans and nomads), drawing activities, and fun quizzes

•  discussions on exchange programs to the United States

•  presentations about Kyrgyz and indigenous Americans, and history, holidays, and sports of the United States

The “American Corners” Program was launched in Kyrgyzstan in 2003 as a partnership between the U.S. Embassy in Bishkek and local institutions.  An American Corner provides comprehensive and up-to-date information about the United States, and thus promotes mutual understanding between the American and Kyrgyz people.  Today there are seven American Corners in Kyrgyzstan serving the populations of Bishkek, Jalalabad, Kant, Karakol, Naryn, Osh, and Talas.  Each center is equipped with public access computers with Internet connection, audio and video equipment, copy machine, and satellite TV.  Corners’ libraries include reference materials, books, English language resources, CD, videotapes and DVDs.  American Corners are open to every citizen who is interested in learning more about the USA.

The United States is honored to contribute to the promotion of commonality of the nomadic culture of peoples of the world and to showcase 25 years of a steadily-growing partnership with the Kyrgyz Republic.