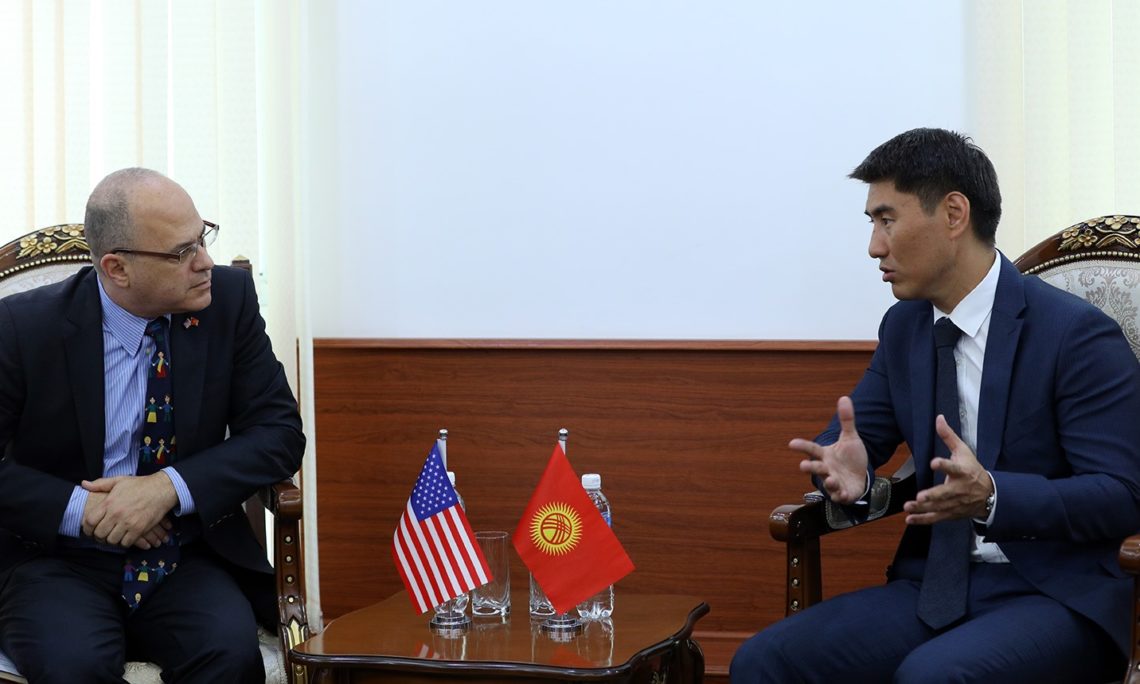 At the consultations, the two governments agreed to deepen cooperation in a variety of fields:

“This is a new era for our partnership.  The Kyrgyz Republic has always played a leadership role as a strong democracy in Central Asia. We believe the Kyrgyz Republic will continue to play a critical role in advancing regional stability and economic cooperation that will benefit not only this country, but also countries throughout the region,” Henick said to the Kyrgyz delegation.

Reaffirming the U.S. commitment to this partnership, Henick noted that since independence, the United States has provided over $2 billion in assistance to the people of the Kyrgyz Republic.  Looking ahead, the U.S. delegation encouraged the expansion of collaboration to develop the economy, increase security, prepare for disasters, protect human rights, combat trafficking in persons, and support English language training.

Pursuing the United States’ priority to advance trade and investment promotion, on October 10, 2019 the United States Embassy is launching the first-ever International Franchise and Trade Expo in Bishkek.  The Expo will connect companies from the United States, the European Union, South Korea, and Japan with Kyrgyz and regional business leaders.

Henick’s visit is the latest step on the path to realizing the stated goal of President Jeenbekov and President Trump to conclude negotiations on a mutually-agreeable Bilateral Cooperation Agreement and to expand cooperation between the United States and the Kyrgyz Republic.

Jonathan Henick, a member of the Senior Foreign Service, currently serves as the Deputy Assistant Secretary for Central Asia Affairs, Public Diplomacy and Press. He previously served as Acting Deputy Coordinator of the Global Engagement Center (GEC) where he helped to lead and coordinate all U.S. government efforts to counter disinformation from Russia, China, and Iran.

Prior to that he was the Principal Deputy Coordinator and Acting Coordinator for the Bureau for International Information Programs. He served previously as the Acting Deputy Assistant Secretary and Director for Press and Public Diplomacy in the Bureau for South and Central Asian Affairs where he was responsible for the conduct of U.S. public diplomacy in 13 countries, including Afghanistan, Pakistan, and India. He has also served overseas as the Counselor for Public Affairs in Turkey, the Deputy Chief of Mission in Timor-Leste, as well as in other positions in Azerbaijan, Turkey, Portugal, and Uzbekistan.

He has worked as a Public Diplomacy Fellow and Professor at George Washington University’s School of Media and Public Affairs and as a visiting Research Fellow and Diplomat-in-Residence at the East-West Center in Honolulu, Hawaii. He has received the Public Diplomacy Alumni Association Achievement Award, as well as individual Superior Honor Awards from the State Department. Originally from New York, he speaks Russian, Portuguese, Turkish, and Azerbaijani, and holds a Ph.D. in Political Science from the University of Hawaii and a Master’s degree in International Affairs from Columbia University.