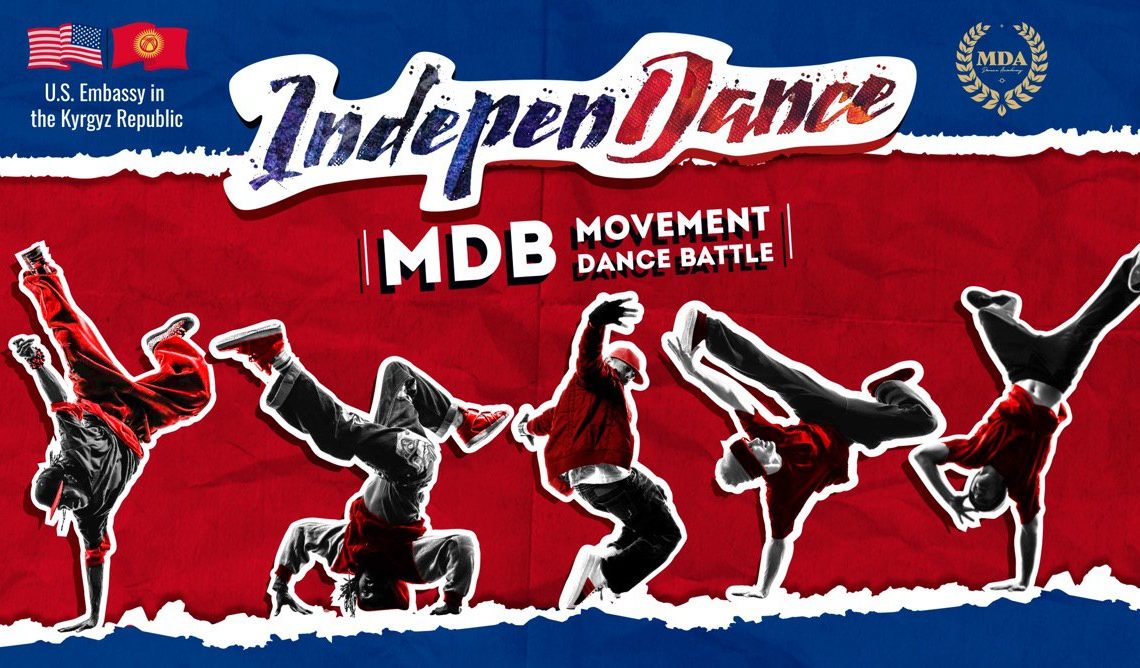 The U.S. Embassy in the Kyrgyz Republic is holding the “IndepenDANCE” Dance Battle in celebration of inclusiveness, tolerance, and disability rights, with support from the famous Kyrgyz dancer Jan Voinov for young Central Asian dancers. IndepenDANCE is a free and open platform for youth to showcase their dance skills and talent.

In the United States, the month of July marks another historic moment: the anniversary of the Americans with Disabilities Act (ADA), a law which passed on July 26, 1990, that guarantees certain rights — and increased independence — to individuals with physical and intellectual disabilities.

As part of this celebration, the U.S. dancers together with Tumar dance group

and Jan Voinov’s dance studio will hold a dance workshop for youth with disabilities on Wednesday, June 26 at the Asanbay Center.

U.S. dancers and judges will teach master classes in popping, hip-hop and break dancing for all Bishkek residents at Asia Mall on June 28 from 10:00 to 14:30. The finals of the “IndepenDANCE” Dance Battle will take place in the evening of 28 June in an invitation-only event.

John Austin (Poppin’ John) is a professional dancer/illusionist and has been performing for over 21 years, specializing in crowd-pleasing robotic illusions, silky smooth waves, and straight explosive popping. He has performed, battled and taught classes all over the United States, Mexico, Europe and Asia. His multiple viral videos on YouTube have over 200,000,000 views making him a “YouTube sensation”. He has worked with brands such as Hyundai, Lipton, Metro PCS, Head & Shoulders, Lego, Swisher Sweets, Trulia Real Estate, Vlado Footwear, Acura, Ford, and Pepsi. John is featured in the music video “Shake It Off” by Taylor Swift also in the AMA’s performance of “Blank Space” by Taylor Swift. He has performed of Americas Got Talent and So You Think You Can Dance and was a Divisional Finalist on NBC’s hit television show World of Dance Season 3. He performs and teaches students all over the world and has turned his dance into a tool for inspiration to the new generation.

Marquese Scott (Marquese ‘NonStop’ Scott) is an American animation dancer who started firstly with popping dance. His work has been seen in music videos that he creates, TV shows such as The Ellen DeGeneres Show, advertisements, and live performances at award shows. He has signed with Xcel Talent Agency and is part of the dance crew Dragon House. His YouTube channel is WHZGUD2. Marquese was first exposed to dancing when he noticed a dance contest at his local roller skating rink. He began to take dancing seriously while in high school in Indianapolis, Indiana, joining friends in a school dance club. After high school, he joined the military and continued to dance whenever he got the opportunity. After leaving the Navy in 2003, he moved to Atlanta, Georgia to be with his family. It is there where he met other dancers and learned the technique of animations, and began uploading YouTube videos of himself dancing in public places. Before he began his newfound skill of dancing, Scott worked at a local Wal-Mart. Marquese’s 53rd YouTube upload, a video of himself dancing to a Butch Clancy remix of Foster the People’s Pumped Up Kicks in 2011 is what propelled Marquese Scott to stardom. The Pumped Up Kicks video of Marquese dancing went viral, gaining 1.5 million views in four days, and currently has over 133 million views.

Jacob Lyons (Jacob “Kujo” Lyons) has 27 years of experience in the performing arts, as a b-boy, choreographer, aerialist, and Chinese pole acrobat. Almost entirely self-taught (and almost entirely deaf), he regularly travels worldwide to perform in circus and dance theater, teach workshops and seminars, and judge b-boy competitions. His choreography has earned him numerous awards, and has been called “drop-dead awesome” by the LA Times.

Some of Kujo’s media work includes back-flipping into jeans for a Levi’s national commercial, being featured as the principal b-boy in Run DMC’s music video, “It’s Like That,” and appearing in the films Battle of the Year: The Dream Team and Step Up 2: The Streets.