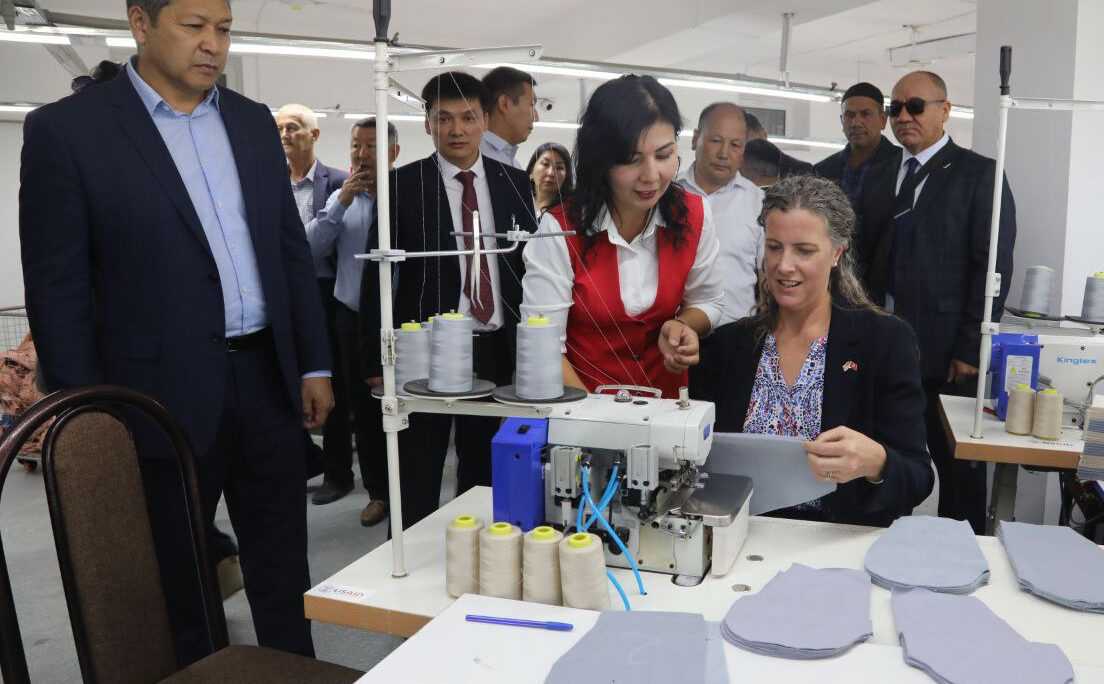 September 14, 2022 – Up to 40,000 pieces of men’s, women’s, and children’s clothing per day will be produced at Pasadena Moda’s new garment factory in Aravan with equipment provided by the United States Agency for International Development (USAID). Partnership with the U.S. government enabled the factory to employ more than 100 people, mostly local women.

Sonata Coulter, Chargé d’Affaires ad interim of the U.S. Embassy in the Kyrgyz Republic, presided over of the equipment handover, together with Plenipotentiary Representative of the President of the Kyrgyz Republic in the Osh Region Ziyadin Jamaldinov and Head of Aravan Rion Administration Seitek Kulubaev.

Chargé Coulter noted that this apparel factory is one of the many businesses the United States supports across the Kyrgyz Republic. “Just in the last four years, we helped over 120 Kyrgyz businesses grow, increase their sales, access new markets, and, most importantly, create over 18,000 new permanent and seasonal jobs,” she said.

Pasadena Moda received overlock, coverstitch, straight line, and other machines through the USAID Enterprise Competitiveness Project. In the next three years, the company plans to expand further and hire up to 500 more people.

“The company is effectively contributing to the reduction of migration flow, enabling a number of fellow countrywomen, our sisters, to live and work in their home country with their families and lead a decent life,” said Azimkul Zholdubaev, the owner of the company.

Pasadena Moda is a well-established company in the Kyrgyz Republic. Initially operating in a domestic-only market, the company now fulfills orders for major retail chains and supermarkets across the region. Pasadena Moda’s knitwear is certified to meet international quality standards.

USAID works with small and medium-sized businesses in the areas of textiles, food production, agriculture, IT, finance, and more to help them expand their production, meet international standards to qualify for exports, and create more jobs in the Kyrgyz Republic.
####