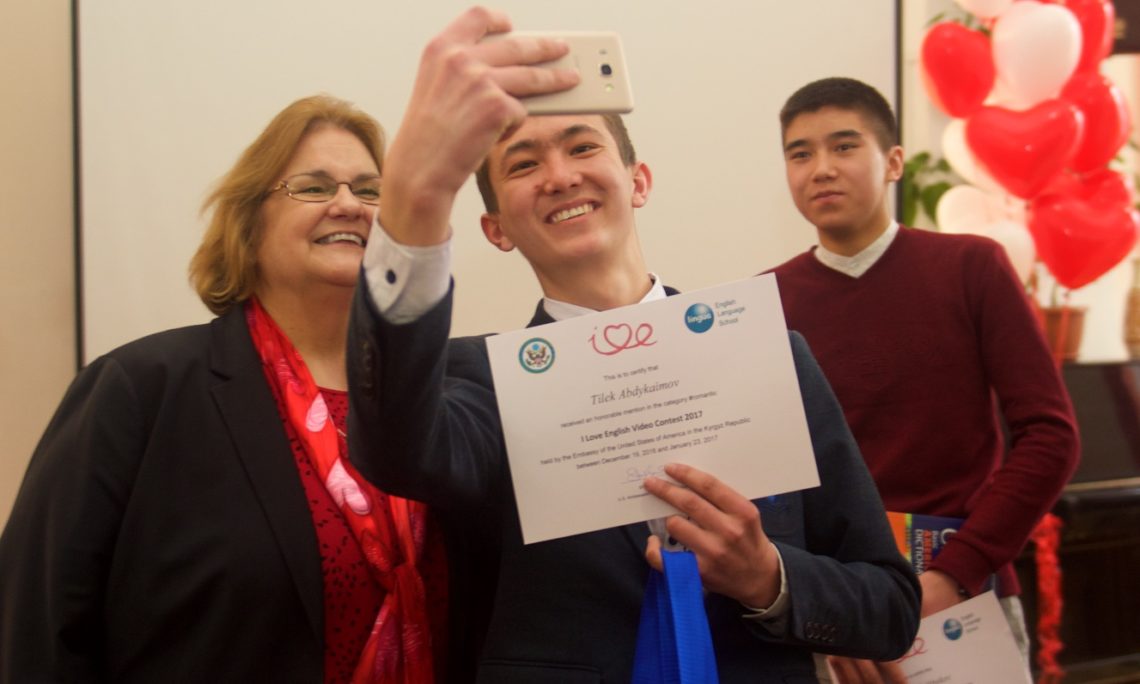 The U.S. Embassy in the Kyrgyz Republic will hold an awards ceremony for the I Love English Video Contest 2017 on February 14, 2017 at 14:00 at the American Corner in Baiyalinov Youth and Children’s Library, Bishkek.

The contest was held between December 19, 2016 and January 23, 2017. About 300 videos created by English language learners were submitted to the “I Love English” Facebook page. A committee of film and media experts and U.S. Embassy representatives selected winners in three categories: funny, romantic, and original. The entry that received the most likes, views, shares, and comments on the Facebook page was selected as the Grand Prize winner.

During the I Love English Video Contest 2017 Awards Ceremony, three English teachers who won the Lesson Plan Contest — which took place between December 20, 2016 and January 22, 2017 — will also be celebrated. Forty secondary school English teachers submitted original lesson plans which introduced students to American culture and celebrated English as an international language. A committee including representatives from the Ministry of Education and Science, the Kyrgyz Academy of Education, the Bishkek City Department of Education, the Forum English Teachers’ Association, and the U.S. Embassy in Bishkek reviewed the lesson plans.

The awards ceremony for the I love English Video Contest 2017 is the capstone to English Language Week (February 7-14), an initiative of the Ministry of Education and Science supported by the U.S. Embassy in Bishkek and implemented by Lingua School. A variety of interactive activities — including American song contests, quizzes, debates, poster contests, professional development training programs, and visits by alumni, diplomats from the U.S. Embassy, and Peace Corps Volunteers — have been and are being held in secondary schools across the Kyrgyz Republic.

Representatives of the Ministry of Education and Science, school directors, English teachers, and alumni of U.S. Department of State Exchange Programs will take part in the awards ceremony.