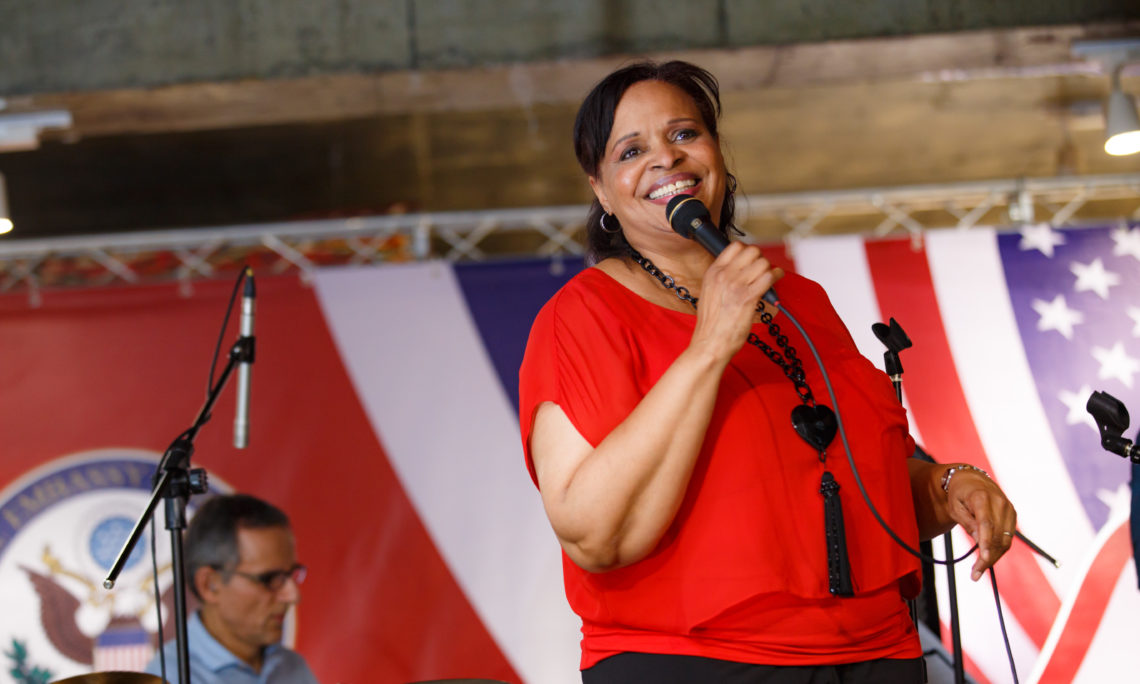 June 30 – July 2, 2018 (Bishkek-Kyrgyz Republic) – In celebration of the 242nd Independence Day of the United States of America and the 100th birthday of the famed American composer Leonard Bernstein, the U.S. Embassy in the Kyrgyz Republic has invited American Voices to present Jazz Bernstein, featuring Bernstein’s most famous jazz and Broadway songs such as “Tonight” and “New York, New York.”  All events are free to the public.

In Jazz Bernstein, the celebrated Amsterdam-based jazz duo of vocalist Deborah Carter and pianist Mike Del Ferro along with guest drummer Drori Mondlak will take the listener through the days of early jazz and swing that influenced the composer in his youth and will perform renditions of his most renowned work. Erkin Kydykbaev, Kyrgyz guest bass musician, will perform with the American jazz musicians.

On June 30 at 10:30, American Voices will kick off the tour at K. Moldobasanov Kyrgyz National Conservatory, where they will conduct a master class for students.  In the evening of June 30 at 19:00, American Voices musicians will perform in Erkindik Park (Erkindik Boulevard, Kurmanjan Datka monument) for Bishkek residents, where American companies such as Gergert Sport, Levi’s, Baskin Robbins, Coca-Cola Bishkek Bottlers, Nathan’s Famous Hot Dogs, Papa John’s Central Asia, and Crocs will sell their products and distribute their free certificates and promotional materials through competitions and games beginning at 17:00 throughout “United States of America in the Investment Promotion and Protection Agency of the Kyrgyz Republic Month” implemented by the Investment Promotion and Protection Agency of the Kyrgyz Republic and the U.S. Embassy in the Kyrgyz Republic.

Mike Del Ferro has been recognized for his innovative style and artistry with the First Prize at the Rotterdam Jazz Piano Competition and the Soloist Prize at the European Jazz Contest in Brussels. His reputation as a soloist, accompanist, composer, and arranger has led to performances and recordings with musicians such as Toots Thielemans, Branford Marsalis, Jack DeJohnette, Randy Brecker, Oscar Castro Neves, Deborah Brown, and Richard Galliano, among many others.  To date, he has released 17 albums under his own name and has appeared as a sideman on many albums in different genres from Dixieland to salsa.  For more information, visit mikedelferro.com.

Deborah J. Carter travels extensively, performing in jazz festivals, jazz clubs, seminars, as well as radio and TV shows in Europe and Asia.  Deborah is also a professor of jazz vocals at the Musikene Conservatory in San Sebastian, Spain.  Her programs with American Voices have taken her to Taiwan, Burma, Moldova, Azerbaijan, and Kazakhstan including intensive collaborations with traditional musicians, trainings for young jazz musicians, and festival appearances. Debora’s latest album is “Blue Notes and Red Shoes.”  For more information, please visit deborahcarter.com.

Drori Mondlak is one of the most outstanding jazz drummers in the contemporary international jazz scene. His touch, subtlety, and interactive approach to playing have brought him critical acclaim and performance opportunities with many creative musicians around the world. He also co-leads the quartet Karolina Strassmayer & Drori Mondlak- KLARO! which tours and records in Europe.  For more information, please visit drorimondlak.com.