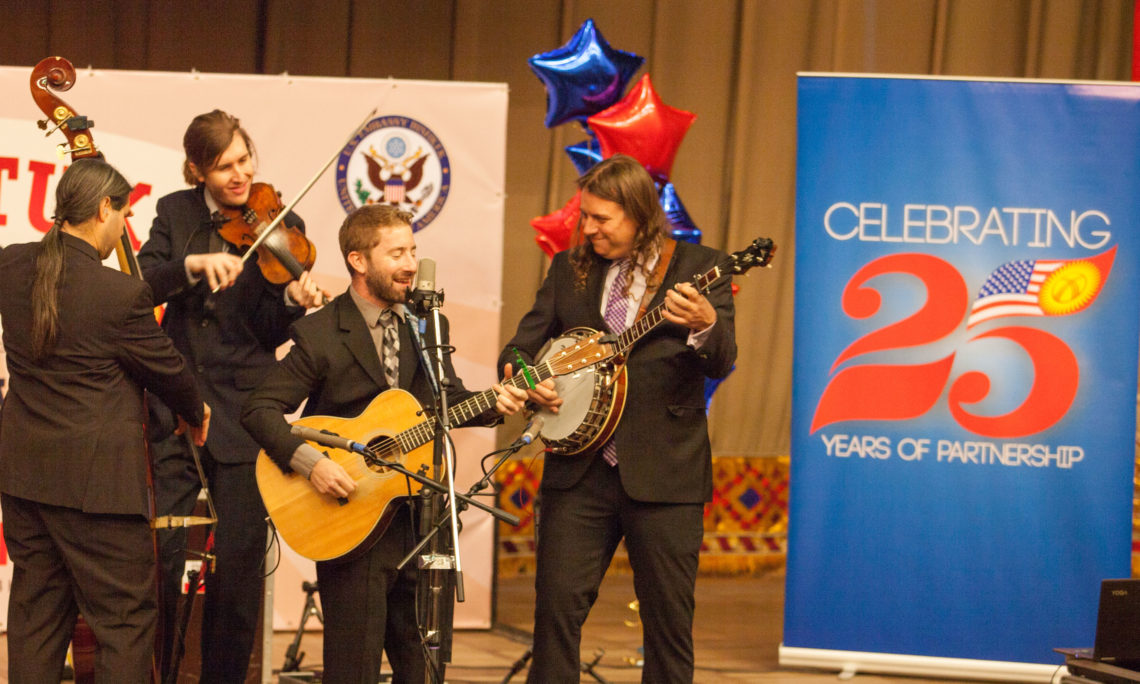 November 28 – December 4, 2016 (Bishkek, Kyrgyz Republic) – The U.S. Embassy in the Kyrgyz Republic is sponsoring a one-week tour of the American bluegrass group, “Henhouse Prowlers.” This tour, called the “Dostuk Music Fest,” is taking place in celebration of the 25th anniversary of diplomatic relations between the United States and the Kyrgyz Republic.

“Henhouse Prowlers” and Kyrgyz folk music group “Ordo Sahna” will hold concerts in Bishkek and Tokmok. The music of both groups celebrates mountain culture, and is a perfect example of how the Kyrgyz Republic and the United States have created beautiful music together, for 25 years.

“Henhouse Prowlers” will present concerts for the students of the Kyrgyz-Russian Slavic University, Bishkek Humanities University, as well as the International University of Central Asia in Tokmok. All Bishkek residents are cordially invited to see the “Henhouse Prowlers” perform at “Bishkek Park” shopping center, and on the stage of the A. Maldybaev Kyrgyz Academic Opera and Ballet Theatre.

The musicians will also perform at Bishkek’s new “Kelechek” neighborhood, where residents of this area will be able to enjoy and get acquainted with live bluegrass music — an essential part of American culture.

“Henhouse Prowlers” will help students develop their musical skills at master classes for young musicians at the American Music Center and the P.F. Shubin Music School.

Eleven years in the making, Chicago’s “Henhouse Prowlers” have built a reputation for hard work and non-stop touring, playing music inspired by the roots of bluegrass while branching out into a sound uniquely their own. From lightning fast picking, to sentimental ballads — playing storied original material, traditional songs, and contemporary covers — the Prowlers’ live show leaves no one wanting.